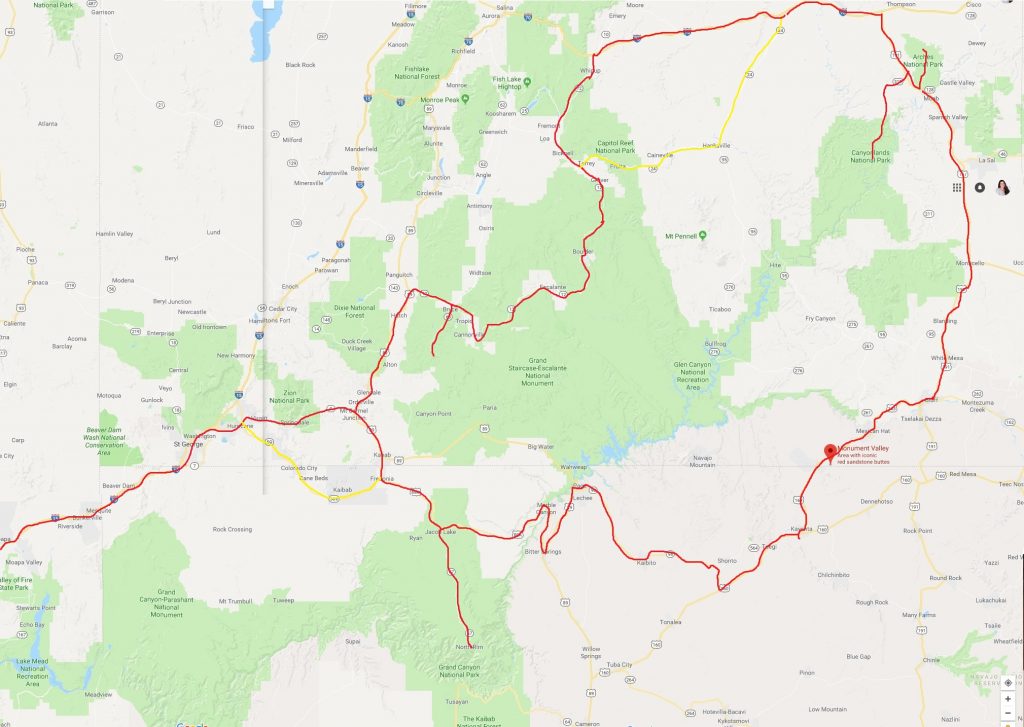 Every year, my boyfriend and I take a big trip. Not too BIG. We do everything on a budget and we have not traveled out or the country yet. We decided on The Grand Circle for 2018. This was our biggest trip yet. At first we were looking at a shorter amount of time. We increased the number of days twice based on the math of how many days it would take to travel the distance we wanted to go. The amount of days – 13 – was finalized when we decided we want to go to Arches and Canyonlands National Park. The shortened version of ‘The Grand Circle’ takes a lot less time if you don’t include these parks, but we didn’t want to go all the way out there to Utah and miss those parks knowing we probably wont be back for a long time if ever. Ok, so this is the break down:

We flew into Vegas from Tampa. Due to delays we arrived at 11:30 at night, checked into out Airbnb, first thing in the AM picked up the rental car from Budget, and left town for La Verkin. La Verkin is a town about 25 minutes scenic drive from Zion. This is where you overnight if you don’t want to boondock (camp out of your car on the side of the road) and are on a budget. The closer option is Springdale – the town outside the gate of Zion – very expensive. Has to be booked far in advance.

ZION – 3 nights – Zion is probably the most managed National Park in the US referred to as ‘Disneyland’. The park has a huge team of staff. In season patrons park in the front parking lot to get on a free shuttle. The shuttle has 8 stops getting you to all the hikes and sights. Based on what day it is IN SEASON you may wait in line up to 45 minutes to get on the shuttle. Expect lots of families. Characters talk on speakers on the shuttle to teach you about the park: a native American Indian, a biologist, a photographer ect. The first ride is a SHOCK. You will be looking straight up the whole time mouth wide open. Canyon walls and mountains shoot up high on the sides of the road. Don’t hurt your neck – lol!

ZION HIKES : Of course we did the well known hikes of Angels Landing (scariest hike in America), the narrows, Weeping Rock (easy). I cant believe so many people do Angel’s Landing. Even infant babies in backpacks. That hike IS really dangerous and scary. It’s really hard too. They call it ‘strenuous’.  I had a last minute Subway permit but they freaked me out talking about potential flash floods that day so we didn’t go. Turned out it would’ve been an ok day to go.

KANNARAVILLE – If we are doing long drives, we always try to find a stop in between. Or if we know a hike is in between 2 destinations we schedule it to be a stop on the way. We went here between Zion and Bryce. It was my favorite hike of the whole trip. Apparently I killed a nerve in my left big toe having my feet in the water too long. If I ever do it again im buying neoprene socks. The hike has multiple waterfalls.

BRYCE – 1 night – We drove through Dixie Forest to get to Bryce. What a beautiful drive! We noticed snow at the top on the side of the road, got out in flip flops and shorts and three snowballs at each other. Bryce was the highest elevation on our trip. We stayed at Bryce Canyon Resort through AirBnB. The one and ONLY thing that sucks about Utah is the alcohol laws. In Bryce there was no where to get full strength beers that we could figure out in one night. I mean c’mon, a 4% Polygamy Porter, that’s just a shame. I discovered something really cool on the TV. It was a Native American TV channel that even played native American music videos. Bryce National Park was cool. Its only a one day trip. No need to be there multiple days for me, unless you want more than one chance at sunrise. They have special pronghorn antelope up there.

CAPITOL REEF – We stopped here driving between Bryce and Arches. I shouldv’e stopped for petroglyphs. We were so tired from doing Bryce sunrise that I was passing out in the car. Things were missed here. Again another day trip. I wouldn’t devote multiple days to this. I loved the colors and the textures. Less people around.

Driving from Bryce through Capitol Reef to Arches in one days is possible, but it is ROUGH. Especially if you did a sunrise shoot. The drive between Capitol Reef and Moab feels long. That is the true desert. No trees, very little plants, no life, very grey. Interesting views that hypnotize while driving. I passed out. Kyle was having a hard time driving but let me sleep. He was very happy to get out of there.

Stayed in an Airbnb 2 nights. I had a photo tour of Antelope Canyon that cost me $200!!!!! This is what it takes to bring a tripod in and be able to stop to take a photo. The tour was over early. We wanted to do a hike for the remainder of the day so we googled around and thought it was a good idea to do Buckskin Gulch. This is not a hike to start in the middle of the day. It’s a hike out in the morning and hike back when the sun gets low enough that the time it takes to get back is done before it’s totally dark out. It’s longer than we thought because we were in a rush to figure something out without doing proper research and hott! We gave up a few miles in and turned around. Obviously we went to do sunset at Horseshoe Bend. What a crazy feature to be right of the road. Horseshoe Bend has no cables either. Huge crowds so get there early.

We camped 2 or 3 nights. We chose North Rim over South because it seemed easier to camp with shorter drive and lower temperatures than the desert south rim. It was really beautiful. Oh TAKE ME BACK!!!!!!!!!!!!!