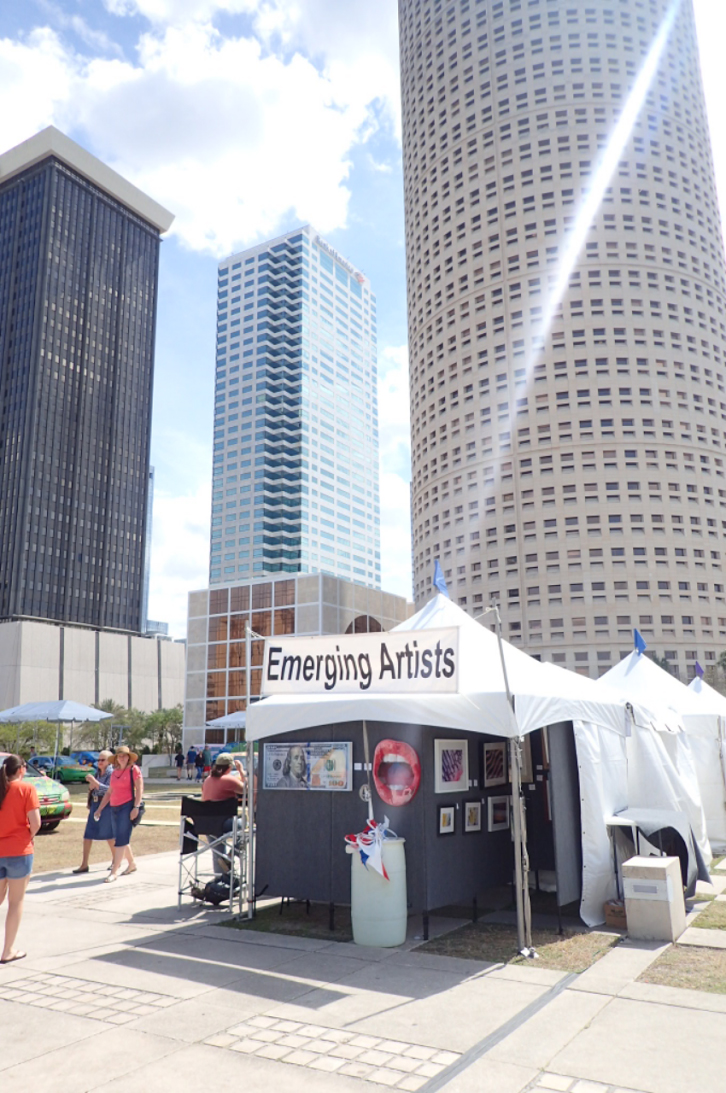 I recently had the HONOR of ’emerging’ twice – once in my town at Gasparilla Festival of the Arts in Tampa, and again two weeks later at Winter Park Sidewalk Arts Festival. Yes, I was pretty shocked I was accepted into both shows. Especially Winter Park which is Named America’s Best Juried Fine Art Fair (Art Fair Calendar, 2013 & 2014), The Winter Park Sidewalk Art Festival is one of the nation’s oldest, largest and most prestigious outdoor art festivals.”  Third time’s a charm?

Thank you so much to both programs for having me. The experience taught me A LOT. I have been working on this macro collection of wildlife and nature since 2014, but I have never had a solo show or shown more than 3-4 pieces in one place at one time besides my art in the Great Bay Distribution Collection.

I answered so many questions and talked to over 1,000 people about the art between my boyfriend and I. I am surprised that people are so shocked by my colors. Everyone asks if they are colorized. They’re not colorized – they’re all natural colors. 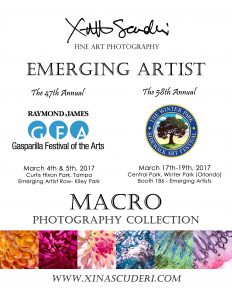 My favorite part was when the 3 jurors came to my booth at Winter Park. The one juror at Gasparilla didn’t talk to me. He spent maybe 30 seconds in my booth. He had just juried 250 artists downstairs by himself. It was 4 o’clock in the afternoon. I GET IT. My friends who do festivals say that’s really what it’s like when you’re in a festival. Sometimes the juror just knows its not what they like, so they move on. THE END!

After Gasparilla, I was surprised when juror Daric Gill talked to me at my booth at Winter Park. We had a good conversation. He told me that when he saw my submission it was so different – they had to have me. They don’t have anything like my work at Winter Park. And that just really meant a lot to me. Because its true!!! There are so many of the same type of photographers at the festivals. I walked around both events and couldn’t find anything like what I do. Full color wildlife and nature macro photography. 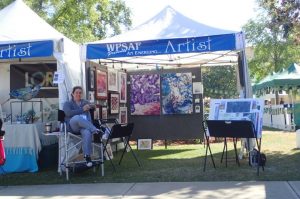 My second favorite moment of was when my aunt Barb and I were in the 11:30 artist load in line at Gasparilla. We were the first emerging artist there, and they made us the first car in the line so we were behind the police escorts being such dorks. It was fun. 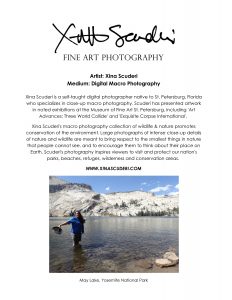 These 2 Emerging Artist programs are close to each other. They have different features. Winter Park makes their decision much earlier in November. Gasparilla gives emerging artists 5 weeks to get ready. What attracted me most to apply to Gasparilla was that it’s at home and there is a $1,500 award that automatically gets you ‘downstairs’ in the ‘adult section’ next year. Winter Park spends the emerging artist budget by giving us all the support money which you will read about in the next paragraph. They don’t give an award. There’s only 3 emerging artists. The least attractive part of Gasparilla was that Emerging Artists are separated up 2 flights of stairs in the neighboring park away from the artists – with the children’s activities. Being above the show in Kiley Garden and looking up at those skyscrapers was really cool. I should’ve planned to focus on lower price items (like $20-35) to be successful in that area. I had more high priced items because I wanted to impress a juror but then when I saw him put a small unframed loose digital print in the jury it really got me thinking, at least I have Winter Park. Later at Winter Park I learned to react better to offer the 9 x 12 glossy portfolio prints I had on hand for $25. Sold a lot of them. I had never been to Winter Park before. My aunt Val from Titusville told me about the trains. It’s a nice park on brick road streets next to the train station. Trains bring people. 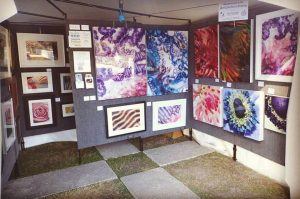 Winter Park was exceptional. Everyone was very nice at Gasparilla, but Winter Park was SUCH gracious hosts. A lot of the other artists, board members, patrons ect. already know who you are because they print a magazine that’s out on racks for patrons. There’s a page for emerging artists with their stories. Kyle was a little freaked out that people knew so much about us from the magazine and the website. Winter Park really treats you special.

Both events feed all artists breakfast. Winter Park gives emerging artists lunch vouchers everyday. Gasparilla feeds everyone lunch both days. Winter Park feeds everyone a fine meal at the historical train station in the park to announce winners on Saturday. Gasparilla’s Saturday night party is for jury pulled artists only. Winter Park has emerging artists together in the general area – not separated from the artists. They have a person in charge of the emerging artists which is great. A direct contact that I could call on the phone. She looked over us like an art mother, which is easier to do when you only have 3 children.

Winter Park provides tent and walls and up to $600 traveling expenses PLUS 4 nights in a hotel PAID FOR. Just an incredible program. Gasparilla gives you a tent (no walls), $250 stipend, and offers a $1,500 award to one of yes you heard right 15 TOTAL EMERGING ARTISTS. That’s a lot of emerging artists. Gasparilla also has this fun thing called ‘Art Collectors In Training Tent’ that you donate a small piece to raise money for the non-profits. They’re always kid related non-profits. Kids up to 14 years old go in for $5-20 with out their parents to pick a piece of art. The parents bring them to meet you. Some of the pieces in this tent are worth a couple of hundred dollars, and these kids are carrying them to take them home. It’s so cute!

Both emerging artist programs totally worth it! I recommend these programs to anyone interested. There is also a program at Coconut Grove that I didn’t know about. 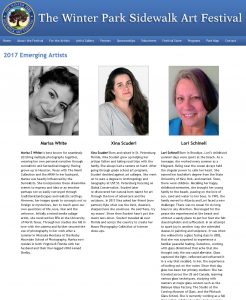